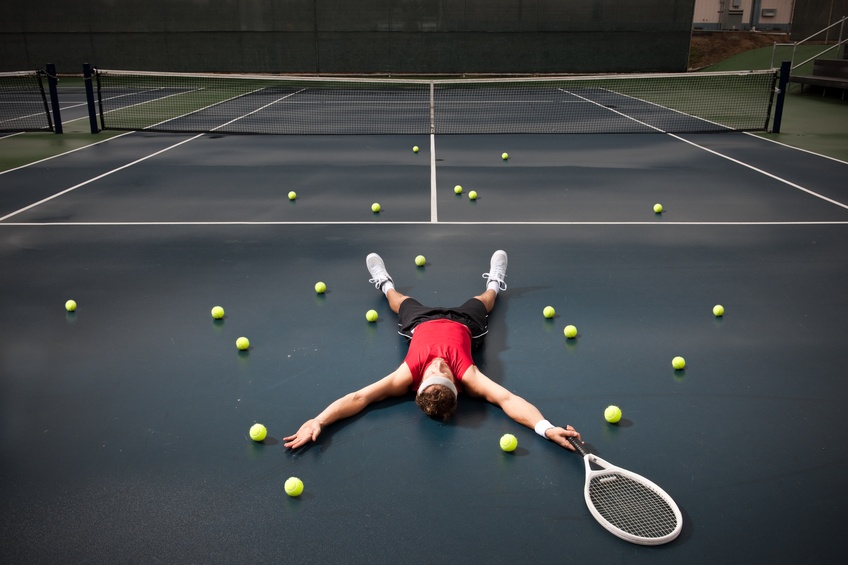 Wake up at four AM; a run for ten kilometers; meditation or Yoga for thirty minutes; Strength and conditioning at the gymnasium with a trainer for forty five minutes; At the ground or the courts or the track for three to four hours of skill training. You are back home or at the hostel for lunch and rest. It is now four PM, exactly twelve hours since you have been up and you are back to the same regimented schedule. Lights off at nine PM to ensure that you get the much needed seven hours of sleep. And this is just the training part. Add your study time to this schedule. More number of hours during the off season; and lesser during peak season and tournaments. Also once you are competing in a tournament, the schedule can get more rigorous, structured and stressful; with very little time for leisure and relaxation.

Imagine doing this every day ever since you are a five year old or if you are one of the fortunate ones, doing this ever since the age of ten. I am surprised that we are even shocked when we hear about an Ashleigh Barty, Naomi Osaka, Ian Thorpe, Mark Spitz, Micheal Phelps or even Bjorn Borg. And a thousand other unknown champions who are perhaps lucky not to be under the relentless media glare. In my last blog, I wrote about the fact that three quarter kids quit sport by the time they turn thirteen. This blog touches upon the issue of burnout at an early age. An age where in most sports, you are just about picking up the threads.

Ashleigh Barty announced her decision to quit tennis at the age of 25, while she was the numero uno tennis player in the world. She did so because she lacked the drive to perform at the highest level or perhaps she was just plain bored of following the same stressful routine every waking minute of her life. She had experienced burnout and this was not the first time in her career. She had taken a break after the 2014 US Open having turned professional in 2010. She said at that time that it was too much too quickly for her as she had been travelling from quite a young age and she wanted to experience life as a normal teenager and have some normal experiences. She tried her hand at cricket and played the Big Bash T20 cricket tournament in 2015-16.

Bjorn Borg did the same almost 40 years ago. His reasons may not be the same but were similar. Both Borg and Barty decided they had had enough. While the modern era offers Barty a plethora of other opportunities, poor Borg struggled. His life ever since that fateful day at Wimbledon in 1981, was a drag.

Why do players burnout at such a young age? Burnout is often caused by an imbalance between the work you are putting in and the enjoyment you are getting out. Also it could be due to boredom, a sense of achievement, distractions of the modern lifestyle, tons of money in the bank, apprehensions of one’s mental well-being or a true sense of finding life’s real meaning. This last reason is perhaps far-fetched but in the end burnout could be the result of a bit of everything else. Let’s look at a few of these reasons that may lead to a player burnout.

Take the example of last year’s woman’s tennis superstar – Emma Raducanu. After her surprise win at the US open as an unseeded player, she has done precious little apart from earning millions in brand endorsements and sacking 4 coaches. Our own P V Sindhu is seen more on commercials than anything significant on the badminton court. Neeraj Chopra, our new wonder kid was so overwhelmed with the adulation from politicians, marketers and hangers on that he suffered from health related issues. Fortunately for India, he seems to have a mature head on his young shoulder to dislodge the unnecessary pressure caused by others who want to partake a share of his earnings and popularity. There are countless others who have suffered burnout leading to a dip in performance due to their inability to handle the distractions that money, fan following and the ephemeral media attention can bring so quickly with one victory. Prithvi Shaw is another name that comes to my mind.

Getting caught up with one’s mental wellbeing is another classic reason which leads to burnout and it’s after effects. Naomi Osaka and Ben Stokes perhaps fall in this category. Fortunately for everyone, both seem to have handled the issue well, especially Stokes by taking a break from their sport to rest their mind and body. Stokes seems to have come back with a fresh mind and now that he is the new England captain, we will hopefully get to see the best of his cricketing abilities.

Recently I read about Ravi Shastri suggesting to Virat Kohli to take a break from cricket. The nine weeks of IPL cricket could have been an ideal time for players such as Kohli and Bumrah to take a break and come back with all guns blazing for the new season. But I guess the hunger for money seems to be larger than their hunger to sustain a longer cricketing career. Of course the pressure from their sponsors is something they find difficult to resist. I am keen to see what unfolds in the new season with both Kohli and Bumrah who are looking jaded and listless on the field.

The modern sporting schedule does not allow much room for athletes to rest their minds and body. The tight calendar that any footballer, tennis player or cricketer has to face will only lead to increased cases of player burnout coupled with mental health issues and injuries. When the calendar is dictated by commerce, there is very little one can do. Unless, a player has the gumption and guts to say enough is enough and also the will to play on their own terms, we the fans will have to reconcile to fact that there will be more Ashleigh Bartys to come.

This is where a sports psychologist or a mental coach can play a significant role. They can help the player understand the reasons why they are facing burnout or simply are lacking motivation. And then work on a plan to help the player manage the issue. At Nudge Sports http://www.nudgesports.in, while our focus is on performance enhancement through personalised mental conditioning sessions, our experienced sport psychologists have the necessary skills to identify the red flags or early signs of burnout.

Let me end with a quote from Steve Tyler of Aerosmith: “99% of success is showing up”. Once that becomes second nature, you don’t burn out.

PrevPreviousWhy do kids quit sports at an early age?
NextRe-setting our Role ModelsNext